PAOLA PIVI
Art with a view

Paola Pivi’s artistic practice is diverse and enigmatic. Her oeuvre appears to have been formed through multiple creative minds. Art with a view at The Bass presents new work by the artist, as well as Pivi’s anthropomorphic, feather-covered polar bears; canvases of cascading pearls; video showing fish in flight on a passenger jet; and an 80-piece mattress installation. Each piece poses questions and is defined by its openness to interpretation, through the appropriation of cultural symbols.

In 1997, as a student, Paola Pivi placed a truck on its side as part of the exhibition Fuori Uso (Pescara, Italy). Two years later, she installed an upside-down G-91 fighter jet in the Venice Biennale’s Arsenale, helping Italy win the coveted Golden Lion award for best national pavilion. In subsequent years, she has invited horses to the Eiffel Tower and a leopard to roam amongst cappuccino cups—documenting the experience through photography.

Such ambitious and spectacular acts have come to define her art. These gestures are about freedom. They deliver unexpected visuals, which surprisingly also appear to be familiar. Nomadic by nature, Paola Pivi has lived in many unexpected places in the world, including the remote island of Alicudi in southern Italy, India, and Anchorage, Alaska. Pivi first exhibited at Viafarini in Milan in 1995, the same year she enrolled in the Brera Academy of Art in Milan.

In 2012, the artist was commissioned to create two original public artworks in New York City: “How I roll”, a project by Public Art Fund, a Piper Seneca airplane lifted on its wingtips and constantly rotating forward, installed near Central Park at Doris C. Freedman Plaza, and Untitled (zebras), a striking image of zebras on a snow-covered mountaintop on the 25-by-75-foot High Line Billboard at West 18th Street. Like all of her photographs, this image is a live-action still, presented without digital intervention. Another of her photographs, Untitled (donkey), shows a lonely donkey on a boat floating in the Mediterranean Sea. Pivi is included in the permanent collections of The Guggenheim Museum and the Centre Pompidou. 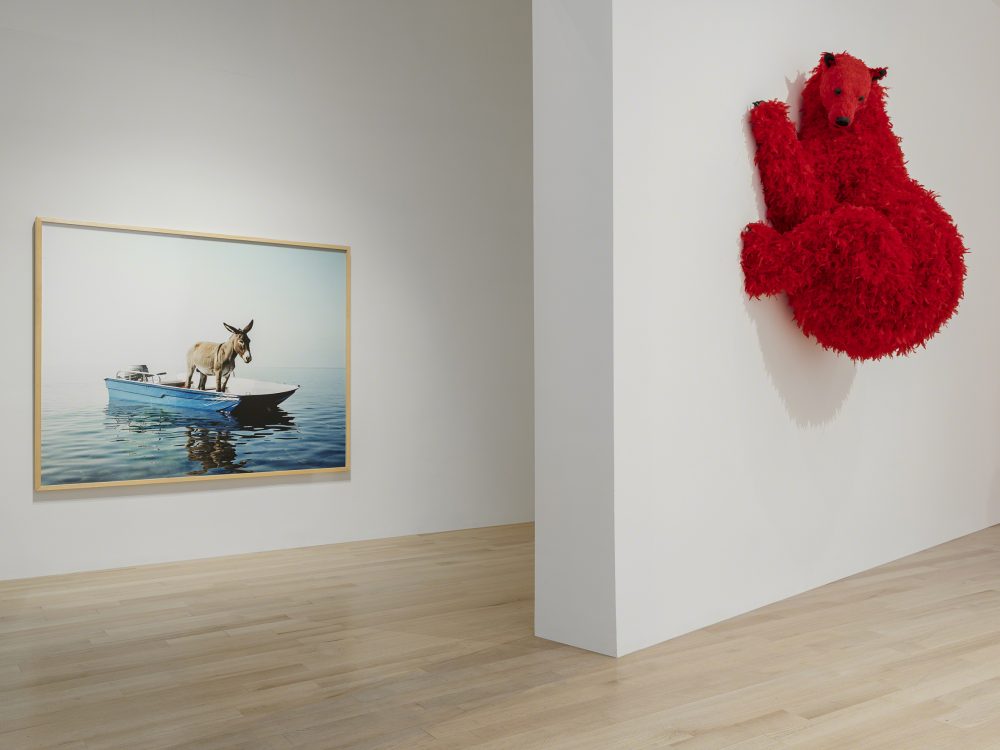 Art with a view is curated by Justine Ludwig, Executive Director at Creative Time and former Chief Curator at Dallas Contemporary. The presentation at The Bass is organized by Leilani Lynch, Assistant Curator, The Bass.

Paola Pivi: Art with a view is generously sponsored by PHILLIPS. Additional support for the exhibition is provided by PERROTIN and Massimo De Carlo, Milan, London, Hong Kong. Production support provided by Davide Quadrio for Arthub, Shanghai/Hong Kong. The exhibition is supported in part by the Diane W. Camber Exhibition Fund. The Bass is generously funded by the City of Miami Beach, Cultural Affairs Program and Cultural Arts Council, the Miami-Dade County Department of Cultural Affairs and the Cultural Affairs Council, the Miami-Dade County Mayor and Board of County Commissioners, and sponsored in part by the State of Florida, Department of State, Division of Cultural Affairs and the Florida Council on Arts and Culture.